Over the past two decades, the Middle East has been witnessing a remarkable change in power balance and the role and positions of many countries especially after the US invasion of Iraq in 2003, followed by the Arab Spring revolutions commencing in 2010, which along with its counter uprisings have led to a series of internal and proxy wars. This resulted in weakening some central countries in the region such as Iraq and Syria and strengthening others as Iran and Turkey by developing its military and political powers in more than one country.

In an attempt to face these changes, some countries resorted to enhancing its relations with “Israel” as a state that is capable of resisting the ongoing transformation taking place in the region. This tendency is attributed to the role “Israel” has been playing in the arena over its history. Since its establishment, and till a few years ago; “Israel” was playing the role of “a policeman” in the region while unlimitedly supported by the US to the extent that it hits everywhere without any restrictions or paying any penalties. For many decades, its army had appeared as “the unbeatable army” whereas nobody could change this perception except for the Palestinian and Lebanese resistance during the past two decades.

Moreover, Israel has promoted itself as an impressive economic model, possessing technological and industrial capabilities comparable to developed countries. To that end, it has employed several methods to promote its powers politically, militarily, economically, socially, etc., while trying to show that it is a unique country in the region and can be relied upon. This represents a dedication to the philosophy of the existence of “Israel” as a functional entity, which is capable of providing services to everyone who wants to thwart the hopes of peoples for liberation and possession of free will as well as the hopes of the countries of the region for renaissance, independence and progress, in order to maintain Western hegemony and influence.

“Israel” was successful in marketing itself to a number of countries based on the image it drew for itself, taking advantage of the political mismanagement of many regimes, and the fear that dominated some of them from the waves of transformation in the Arab world, in addition to concerns over the growing Iranian influence in the region. So, “Israel” presented itself, and some dealt with it, as the country that is capable of facing internal and external challenges and potential transformations.

On the other hand, there is another group in the region underestimating the capabilities of “Israel” and its multiple elements of power at the political, military or economic levels. They believe that “Israel” cannot engage in a serious confrontation with anyone in the region without gaining an external support, especially the American aid. They opine that as a functional state, Israel’s capabilities get diminished whenever its role gets weakened, elaborating that this situation can be explained by “spider web” hypothesis launched by the Lebanese resistance against “Israel”, an expression that denotes the extent to which “Israel” is actually weak. The resistance forces discourse in the region went beyond talking about the defeat of “Israel” to discussing its ultimate disappearance.

Standing between these two positions, this book, which was written by a group of Palestinian specialists and academics, tries to scientifically and systematically answer the question of the strength and weakness of “Israel” far from exaggeration or underestimation. In its seven chapters, the book provides a systematic analysis of the various aspects of the strength of the Israeli entity and introduces Arab readers and decision-makers to the actual reality of the Israeli power.

The book marks the third edition of the Department of Israeli Studies at the Vision Center for Political Development. It addresses the various aspects of the Israeli affair including political, economic, cultural and social issues. The book was produced by Arab academics and writers who were keen on providing a scientific and methodological analysis, based on a national realistic perspective, in an attempt to lessen the dependence on Israeli related publications. The book is added to many other publications by the Vision Center including the two books entitled “The Turkish Republic in the Israeli Political Perspective” and “Benjamin Netanyahu: Reproducing the Zionist Project within the Civilizations Clash System. 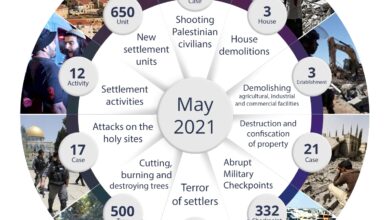 Summary of the Israeli Colonial Violations in the West Bank, May 2021 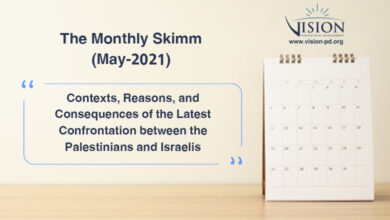 The Monthly Skimm (May 2021): Contexts, Reasons, and Consequences of the Latest Confrontation Between the Palestinians and Israelis.

Summary of the Israeli Colonial Violations in the West Bank, April 2021 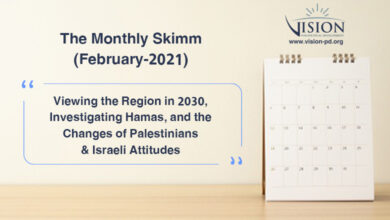 The Monthly Skimm (February 2021): Viewing the Region in 2030, Investigating Hamas, and the Changes of Palestinians & Israeli Attitudes