He worked as a teacher at Halhoul Secondary School for Girls. Seven years later, he quit
teaching there and started his new job as an instructor at An-Najah National University
until the year 2006. In cooperation with his colleagues, he founded the Geography
Department at An-Najah University and was chosen as its chairman. He was a member of
several councils of the An-Najah University and was the secretary of the university’s
trade union.

Dweik was affected by the overall national situation and by his family’s political
orientation, which was Nasserism. However, he did not follow their path; he was
interested in the Islamic ideology and Muslim Brotherhood especially after The Six-Day
War in 1967. Due to 1967 war, his family returned to Palestine and resided in Hebron
City. In 1988, he joined the Islamic Resistance Movement (Hamas) and took part in the
First Intifada to resist the occupier. In 1989, he was arrested for 6 months by the Israeli
Occupation Forces (IOF) for joining Hamas. In 1991, he was arrested again for 6 months
for participating in activities and events supporting Hamas. With other 415 Palestinians
from the West Bank and the Gaza Strip, the IOF issued a decision of deportation against
Dweik and was exiled in Marj El Zhour in Lebanon at the end of 1992. He stayed there
for one year and returned to Palestine. In 1994, he was arrested again by the IOF.

Dweik worked as a Public Relations Officer at Patient’s Friends Benevolent Society in
Nablus. Also, he worked as the Chair of the Higher Education Committee in several
charitable institutions. He published several studies of which one of them is about the
Palestinian society. During his time at An-Najah University he supervised a number of
master’s thesis. Besides, he was the official English spokesperson of the Palestinians who
were deported out of Palestine during his deportation in Marj El Zhour. In 2006, he was
elected to be a member of the Palestinian Legislative Council (PLC) to activate Change
and Reform Bloc in Hebron. After that, he became the chairman of the council which
resulted in the IOF arresting him for 3 years. He was arrested after his 3 years
imprisonment for six months and was arrested againg for one year after his six months
imprisonment.

Dweik believes that Palestinians will beat this inhuman occupation of Palestine and will
free their land. The only way to achieve this is by organized resistance. He clearly states
that the Zionist project is a failed project. As for the Oslo Accords, he believes that this
agreement is shameful and its results are bad for the Palestinian people. He added that
this accord brought nothing but devastation and created divisions between the Palestinian
people. It only served the Israeli occupation objectives to have a national home on the
land of Palestine. This is the result of not expressing their anger and rejection on the Oslo
Accords, the establishment of the new Palestinian government and its policies in arresting
leaders following Hamas, and on attempting to disturb the work of the government.
Dweik also believes that Palestinians have the right to resist the Israeli occupation in all
ways, even if they turn to armed conflict. This is what the United Nations (UN) charters
set forth in the case of people resisting the occupation. Furthermore, he believes that the
participation of the Islamic movements in the Palestine Liberation Organization (PLO)
will strengthen it. This will make the PLO an organization that truly represents the
Palestinian people and be more effective than before in defending the Palestinian case. 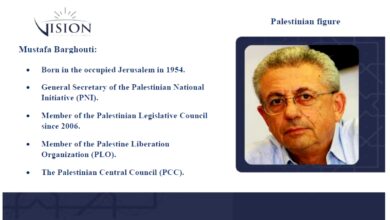