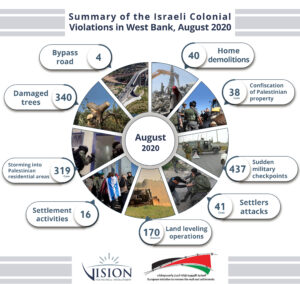 This report briefly summarizes the Israeli occupation violations of human rights against the Palestinian lands and people during August 2020. The report replies on information from the daily reports of the Palestinian Monitoring Group of the PLO’s Negotiations Affairs Circle, Monitoring Israeli Colonization Activists in the Palestinian Territories (POICA), and We Watch Israeli Violations (WEWIV) body.

Table: The Israeli occupation and settlements and violations during August 2020

During this month, 3 citizens were killed in the West Bank. On 7/8/2020, Dalia Ahmed Samoudi, 23, from the city of Jenin, was killed by the Israeli occupation forces after shooting her in the chest with live bullets. On 17/8/2020, the occupation forces shot Ashraf Hassan Halasa, 30, from the town of Sawahrah al-Sharqiya, which led to his death. And on 19/8/2020 the Israeli occupation forces shot at 3 children near the entrance of Dair Abu Meshal village, resulting into the killing of child Mohammed Damer Mattar, 16 years old, and wounding the other two.

While the number of civilians who were injured this month at the hands of the occupation forces and settlers reached 64, 52 of them were in the West Bank, and 12 others in the Gaza Strip. Among the wounded, 3 were children, 3 female citizens, a paramedic, 1 with special needs, and a fisherman.

Arrest, detention, storming into residential areas, and deportation of citizens from Jerusalem:

During this month, the occupation arrested 382 citizens, including 381 in the West Bank and one in Gaza. The following is the distribution of detainees according to the governorates: 90 Jerusalem, 63 Ramallah, 35 Jenin, 4 Tubas, 27 Tulkarm, 14 Qalqilya, 40 Nablus, 14 Salfit Jericho 8, 44 Bethlehem, 42 Hebron, and one Gaza. Among the detainees: 15 children, six female citizens, two university students, and one with special needs.

The Israeli occupation courts imposed house arrest on 20 citizens of Jerusalem for different periods. In addition, the occupation deported 14 Jerusalemite citizens from Al-Aqsa Mosque, or from their places of residence in Jerusalem for different periods. The occupation army committed 319 incursions into Palestinian residential communities this month, including 316 in the West Bank and 3 in the Gaza Strip. The following is the distribution of these incursions by governorates: 33 Jerusalem, 54 Ramallah, 34 Jenin, 10 Tubas, 24 Tulkarm, 16 Qalqilya, 38 Nablus, 17 Salfit, 8 Jericho, 30 Bethlehem, 52 Hebron, 1 North Gaza, 1 Khan Yunis, 1 Rafah.

While 13 civilians were detained during the raid on Palestinian homes and at the Israeli checkpoints for different periods of time.

During the month, the occupation army set up 437 abrupt checkpoints to disrupt the movement of citizens throughout the West Bank. These checkpoints were distributed among the governorates as follows: 11 Jerusalem, 6 Ramallah, 8 Jenin, 1 Tubas, 5 Tulkarm, 79 Qalqilya, 45 Nablus, 27 Salfit, 18 Jericho, 159 Bethlehem, and 78 Hebron.

While the occupation army opened fire on Palestinian citizens in 232 cases, including 116 in the Gaza Strip and 116 in the West Bank. The shooting cases were: 51 during the storming of villages and cities, 65 by military checkpoints, 87 by military sites, and 29 by Gunboats.

During this month, the occupation demolished 40 Palestinian residential buildings. The demolitions were divided as follows: 2 homes in Bethlehem, 25 homes in Jerusalem, 4 in Hebron governorate, 8 homes in Ramallah, and a house in Jenin.

The occupation forces also demolished 22 Palestinian facilities, including barracks and sheep pens, garages, shops, agricultural rooms, and others. The demolitions were distributed as follows: 11 in Jerusalem, 2 in Jenin, 1 in Bethlehem, 2 in Hebron, 5 in Jericho, 1 in Tubas.

The occupation forces also issued 15 notices to demolish homes and facilities and evacuate Palestinian lands. These are distributed as follows: Hebron 7, Bethlehem 5, Tubas 3.

In the West Bank, there were 27 cases of destroying home furniture, damaging citizens cars, uprooting olive trees, and demolishing barracks, in addition to 9 cases in which citizens’ cars, recording cameras, personal belongings, and equipment were confiscated by the occupation forces.

The West Bank witnessed 22 cases of attacks by the occupation army and settlers on Islamic holy sites, including storming the Al-Aqsa Mosque, holding Jewish rituals in it, attacking mosque guards, as well as closing a mosque in Beit Sahour and preventing citizens from performing prayers in it.

Terror of the occupation army and settlers:

This month, settlers carried out 41 cases of assault and attack on Palestinian citizens, which consisted of running over citizens, throwing stones at their cars and homes, cutting down their trees, burning their agricultural lands, storming towns, and physically assaulting citizens.

On August 1, 2020, the Israeli Municipality approved a plan to establish a settlement employment complex located on 90 dunums on the eastern side of the village of Al-Issawiya.

On August 5, 2020, near the settlement of “Nujuhot” in the Hebron governorate, the occupation forces razed large areas of citizens’ land owned by two families: Ghanam and Odeh, in order to pave new roads for settlement purposes.

On August 6, 2020, a group of settlers near the water well of Deir Sharaf village (which supplies the city of Nablus and the surrounding villages with drinking water), erected a tent and a caravan in an attempt to establish a settlement outpost in the area.

On August 6, 2020, the occupation forces swept away an area of ​​agricultural land owned by citizens of the Al-Shawahin family in Khallet Al-Adra, located adjacent to the “Susiya” settlement, east of Yatta – Hebron.

On August 10, 2020, the occupation forces swept away an area of ​​agricultural land in the Arab al-Khuli community, east of Kafr Thulth – Qalqilya, and began digging a water transmission line in preparation for controlling the land.

On August 12, 2020, a group of settlers in the areas of Al-Mazukah and Al-Suwaida, located in the northern Jordan Valley, fenced off large areas of the citizens’ agricultural lands in an attempt to seize them.

On August 12, 2020, the occupation forces swept away an area of ​​land that is threatened with confiscation in the Zohr Subuh area of ​​Bidya town.

On August 12, 2020, the occupation forces in the areas of Khallet Ghanayem and Qunya, located on the eastern side of the village of Iskaka-Salfit, bulldozed an area of ​​the citizens’ lands, with the aim of expanding the settlement outpost “Novi Nehemia” established on the lands of the villages of Yasuf and Iskaa.

On August 13, 2020, the occupation forces began paving a road in the area of ​​Ras Al-Masid, which is located in the vicinity of the town of Kafr Al-Labd, Izbat Al-Hafsi, and the suburb of Zinaabeh in Tulkarm, a length of 10 km to reach the settlement of “Ifni Hefetz”, which is built on the lands of Kafr Al-Labd.

On August 15, 2020, the settlers named the outpost they established in the Sweida area in the northern Jordan Valley.

On August 16, 2020, the occupation forces began paving a settlement road in the agricultural lands of the citizens along the mountain in the Al-Jabal Al-Wastani area in the village of Shofa – Tulkarm, in preparation for establishing an industrial zone.

On August 24, 2020, a group of settlers in Khallet Al-Forn in the village of Birin, south of Bani Naim – Hebron town, erected a caravan on a plot of land owned by citizens of the Nasser al-Din family, in an attempt to establish a new settlement outpost.

On August 27, 2020, a group of settlers in the Gharaba area of ​​the town of Abwein – Ramallah, placed 4 caravans on the citizens’ private agricultural lands in an attempt to establish a settlement outpost.

On August 31, 2020, some settlers in the Abu Qandoul area in the northern Jordan Valley continued construction work for facilities and (barracks) in the settlement outpost that was established several months ago in the area with the aim of expanding it.

The most prominent settler terrorist attacks:

On August 1, 2020, 12 sheep died in al-Mughayer village – Ramallah, as a gourp of settlers of the settlement outpost “Gebeit, which is established on citizens’ lands in the east of the village, sprayed pesticides and poisons on the lands of the pastoral village, owned by the citizen Fadl Ibrahim Abu Alia.

On August 2, 2020, a group of settlers near the Al-Taybeh junction (on the Al-Maarajat road connecting the governorates of Ramallah and Jericho) kidnapped the citizen Ali Basil Maslamah, a resident of Sinjil – Ramallah for a short period.

On August 9, 2020, a group of settlers from “Yitzhar” settlement threw stones at civilians’ vehicles passing by the bypass road that passes near the settlement and leads to the Qalqilya governorate, wounding a citizen.

On August 11, 2020, a group of settlers entered the citizens’ agricultural lands in the town of Hawara – Nablus and attacked Mustafa al-Masri while he was working on his land, which led to his injuries and a broken foot.

On August 12, 2020, a group of settlers from “Hafat Gilad” settlement, which is built on the lands of the village of Jeet – Qalqilya, set fire to the citizens’ lands planted with olive trees in the village.

On August 13, 2020, a group of settlers stormed the village of Asira al-Qibliya – Nablus and set fire to a bulldozer owned by the citizens, and attacked the house of Abdel Basit Ahmed, located on the outskirts of the village.

On August 14, 2020, a settler ran over with his vehicle Khader Samreen, 15, from Ramallah, on the main road in the center of Huwara – Nablus, causing injuries and bruises.

On August 17, 2020, a group of settlers stormed the village of Beit Safafa – Jerusalem and set 13 civilian vehicles on fire.

On August 18, 2020, a group of settlers from “Ma’on” settlement, which is built on citizens’ lands east of Yatta – Hebron, attacked citizens’ properties in the Ezbet Wadi Al-Sawy area, and demolished a tent used as a barn for raising sheep. Another tent used for housing was also stolen, and a water tank destroyed, owned by Salman Abu Hamid.

On August 30, 2020, a settler was driving his vehicle on the main road near the village of Al-Jawaya, east of Yatta, and ran over a herd of sheep owned by Ayed Al-Shawahin, causing the death of a number of them. 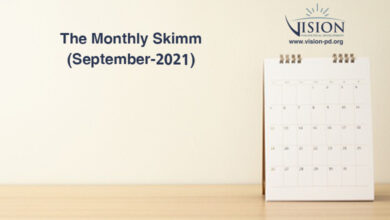