The following table presents the violations committed by the IOF in May of 2020:

Arrested, Detained, and Deported Palestinians (from Al-Aqsa Mosque and Jerusalem):

During May, the Israeli forces arrested 321 Palestinians, most of them were from the West Bank, during the daily raids and through the checkpoints that they installed, including 25 children, three women, a journalist, and three university students.

Governorates that recorded the most arrests were: Jerusalem, 129 arrests; Jenin, 45 arrests, especially in Ya`bad village, where an Israeli army soldier was killed by stone thrown on his head; then Hebron, 42 arrests. The Israeli forces also carried out 31 arrests of citizens during their raids, or at the checkpoints established between the governorates.

The Israeli army carried out 200 raids into Palestinian residential areas, 195 of which were in the West Bank. The largest number of raids were in Jerusalem with 36 raids; followed by Hebron, 33 raids; followed by Jenin, with 27 raids. The Israeli Army soldiers opened fire 207 times divided equally between the West Bank and the Gaza Strip. Shootings in the West Bank accrued during incursions and raids into Palestinian areas, or through military checkpoints established on the lands of Palestinians. In the Gaza Strip, the Israeli soldiers fired from warships and border military sites.

However, in Ramallah city, the demolition came within the framework of the policy of collective punishment for the family of the prisoner Qassam Al-Barghouti.

Assault on the Holy Places:

The Israeli occupation and the settlers carried out two attacks against the holy places during last May, and this was done at the end of the month, especially after the decision of reopening mosques and places of worship after they were closed due to the coronavirus. The Israeli occupation also prevented the Palestinians from reaching the Ebrahimi mosque. The call of dawn prayer was also banned. The settlers, under the protection of the occupation forces, stormed Al-Aqsa Mosque after it was reopened.

The most prominent settlement activities carried out by the IOF during last May:

The attacks of Israeli settlers:

The number of attacks carried out by settlers during May reached 44 in various governorates of the West Bank. The following points present settlers’ attacks during May 2020:

3-5-2020: The settlers cut down the branches of 24 olive trees in Imatin village in Nablus Governorate.

6-5-2020: The settlers stole 70 sheep from the owner after beating him near the settlement of Homesh al-Mekhleh near the village of Barqa in the Nablus governorate.

6-5-2020: A settler with his dog assaulted a citizen in the city of Jerusalem, which led to his injury and later he was rushed to the hospital.

6-5-2020: The settlers stormed the lands of the citizens near the Efrat settlement in Bethlehem and cut 450 grape trees.

20-5-2020: The settlers stormed the village of Nahalin in Bethlehem and cut off the branches of 40 olive trees for the citizens.

17-5-2020: The settlers cut the branches of about 40 olive trees in the area of ​​Ras Al-Deir in the town of Yatma, in the Nablus Governorate.

18-5-2020: A settler in the city of Jerusalem stabbed a child in the neck, and he was rushed to the hospital.

21-5-2020: The settlers set the lands of the citizens on fire near the Minaf settlement in Tulkarm, destroying dozens of trees on a land area of ​​about 400 dunams.

05/23-2020: The settlers, with the protection of the occupation forces, attacked the citizens of the Old City of Hebron, causing bruises.

20-5-2020: The settlers set fire to about 30 dunums of agricultural lands, near the settlement of Hafat Ma’on, east of Hebron.

24-5-2020: A group of settlers assaulted two Jerusalemites and severely beat them.

25-5-2020: The settlers, under the protection of the Israeli occupation soldiers, opened fire towards the citizens while working on their lands. As a result, two civilians were wounded by live bullets.

20-5-2020: The settlers bulldozed about 47 dunums of Palestinian land in the villages of Deir Dibwan and Ramon, east of Ramallah. 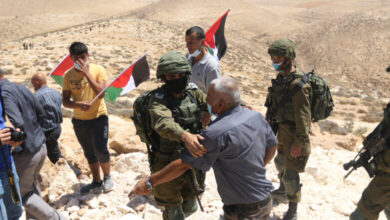 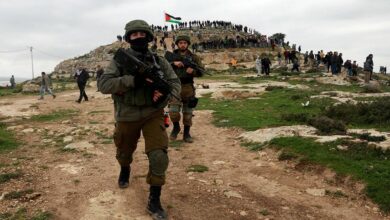 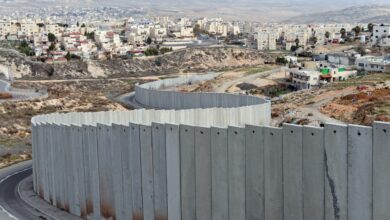